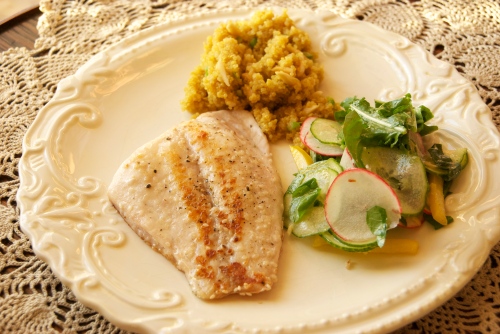 I could happily live on. Now I’ve mentioned before that my place is not in the kitchen, however I am lucky enough to have some fab cooks in the family. My father-in-law treated us to a homemade dinner of Sesame Crusted Red Snapper, Ginger Dressed Veggies and Curry Quinoa. Adapted from a Rachael Ray recipe, it was a very healthy and delicious dish. 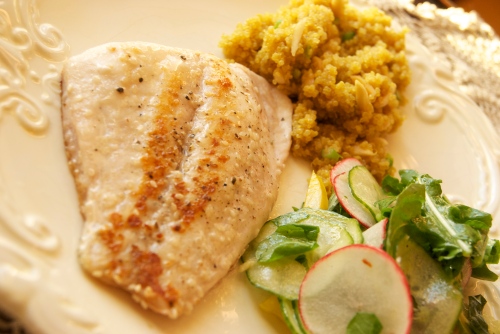 Directions:
n a salad bowl, combine the ginger, jalapeño, vinegar, salt and pepper. In a slow steady steam, whisk in 3 tablespoons of vegetable oil. Add the radish, cucumber, yellow pepper and toss to coat. Let the veggies sit and marinate at room temperature while you prepare the sesame crusted snapper.

Place a medium saucepan on the stove. Add the sliced almonds and toast over moderate heat then remove from pan and reserve. Return pan to stove top and add the vegetable broth, 1 tablespoon of vegetable oil — just eyeball it, curry powder and cinnamon. Raise heat and bring broth up to a boil. When it boils, add quinoa to the pot and stir to combine. Cover the pot and turn off the heat and let the quinoa stand until ready to serve.

With a sharp paring knife, score the skin side of the snapper fillets by slashing three, 1/8-inch thick cuts across the width of the fish. Season both sides of the fish with salt and pepper. Sprinkle and then gently press the sesame seeds onto both sides of the fish. Heat a nonstick large skillet over medium-high heat with 2 tablespoons of vegetable oil, two turns of the pan. Once the pan is hot, add the seasoned fish to the skillet skin side down. Sauté the snapper for 4 minutes and if you find that the fillets bubble up in the center section, carefully press each fillet down with a fish spatula. Flip the fillets and continue to cook on the second side for 3 minutes or until the fish is cooked through and opaque. While the fish is cooking on the second side, finish off the ginger dressed snappy veggies and prepare the quinoa.

To the marinating vegetables, add the arugula and basil. Toss to combine.

Remove the lid on the quinoa. Add scallions and toasted almonds and fluff quinoa with a fork.